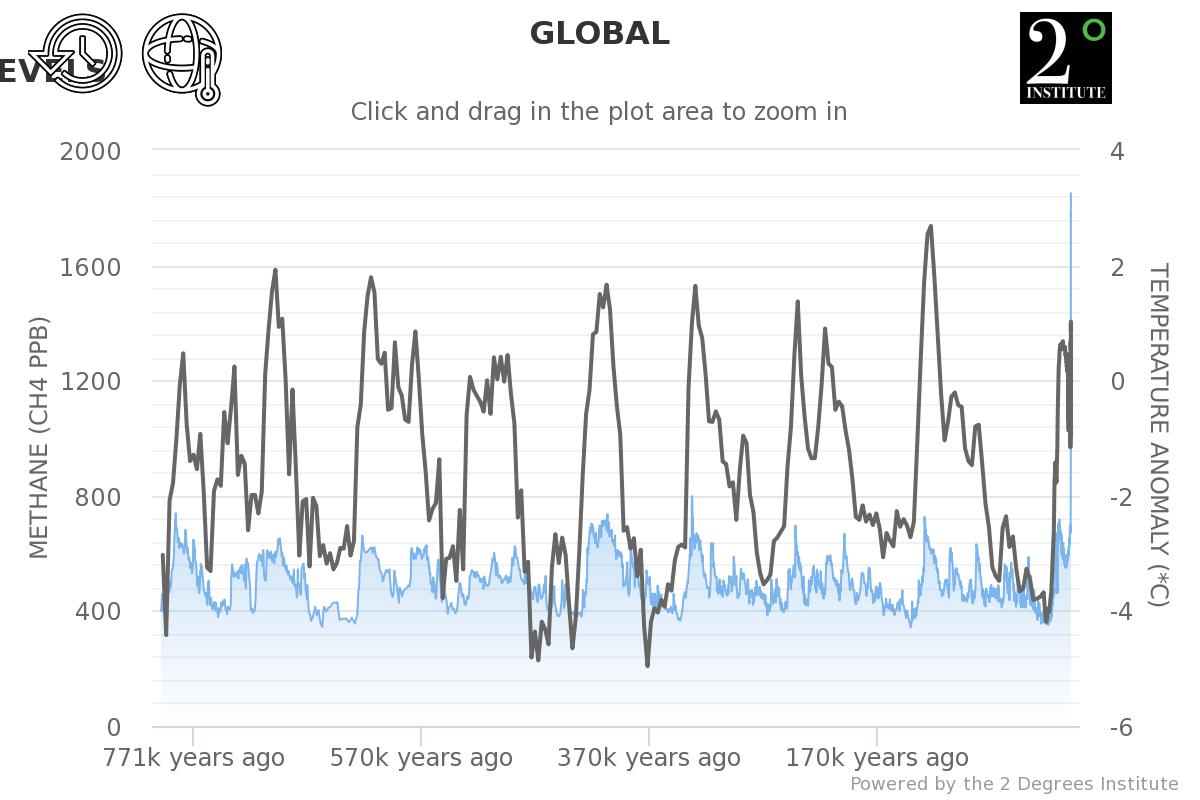 Notice that the methane levels have jumped up to 1800 ppb in the last 50 years [Blue Line] the global mean temperatures [Grey Line] used to mirror methane spikes, but now something else is happening graph source https://methanelevels.org

Since 1983, globally-averaged CH4 levels have been collected and updated monthly as new samples are added to the analysis. A 3 month lag is required to ensure the data has been properly vetted for possible contamination. Prior to 1983, methane levels have been extracted from ice core data from Antarctica.

Decomposition of organic matter by bacteria under anaerobic conditions in, for example, wetlands, flooded soils, sediments of lakes and oceans, sewage, and digestive tracts of ruminant animals, involves complex simultaneous processes that can produce methane as a byproduct.

Three steps, each the responsibility of different types of organisms, are required: fermentation degrades organic matter into simple fatty acids and CO2; other organisms convert the fatty acids into CO2 and H2; and methane-generating bacteria (methanogens) metabolize these substrates (e.g., by hydrogen reduction of acetate, formate, and CO2) and CH4 is produced as a byproduct. In wetland environments, methane that diffuses through the water column must pass through an oxic (oxygen-rich) layer at the surface. Most of the methane that diffuses to the surface is destroyed by methane-oxidizing bacteria (methanotrophs) at the water–atmosphere interface. Generally, the amount of methane released to the atmosphere depends on the production rate and the efficiency of transport through the oxic layer. In natural wetlands and rice paddies, methane can also reach the surface through bubbles and transport through the stems of plants; in contrast to diffusion, these modes of transport to the atmosphere are relatively efficient. Methanogens are also found in the digestive tracts of ruminant herbivores. The animals do not have the enzymes necessary to digest cellulose; rather, they have a symbiotic relationship with fermenting bacteria that produce short-chain fatty acids, vitamins, and protein used by the animal for growth. As a result, species such as cows, sheep, buffaloes, and termites are efficient methane producers, and they contribute ∼20% of total CH4 emissions to the atmosphere.

In the year AD 2000, less than 2 parts in 106 (on a molar basis) of the Earth’s atmosphere was methane (CH4), but this is a factor of 2.5 more than was present in 1750, prior to the industrial revolution. Even though this abundance is relatively small, CH4 is the most abundant organic compound present in the atmosphere, and it significantly affects Earth’s climate and atmospheric chemistry.

Methane is a greenhouse gas because it absorbs infrared radiation in a region of the terrestrial IR spectrum that is unaffected by water vapor and carbon dioxide (CO2), the two most important greenhouse gases. Increasing amounts of atmospheric methane will potentially contribute to climate change. Methane currently contributes B0.5 W m 2 to the total direct radiative forcing (estimated to be 2.5 W m 2 ) caused by increasing atmospheric burdens of long-lived greenhouse gases since 1750. Only CO2 contributes more to this total (B1.5 W m 2 ).

Since CH4 has the potential to impact climate significantly, it has been targeted by the Kyoto Protocol for reduced emissions. Strategies designed to mitigate the potential impact of CH4 on climate must rely on a detailed understanding of methane’s atmospheric budget (i.e., the balance of sources that emit CH4 to the atmosphere and sinks that remove it). Since many of the sources that emit CH4 to the atmosphere are diffuse and highly variable in space and time, estimating total emissions is difficult. (This is in contrast to anthropogenic compounds such as the chlorofluorocompounds, whose emissions are determined from production.) Constraining the global CH4 budget requires a range of studies including background atmospheric measurements, laboratory and field studies of CH4 emission rates and the factors affecting these emission rates, and computer modelling studies.