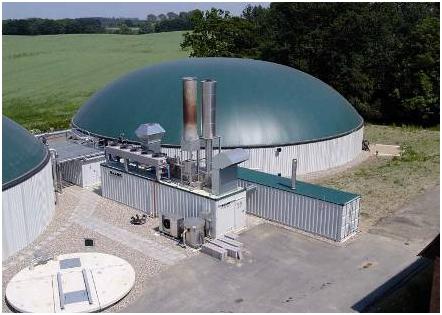 Yes AD combined with CHP or even CHCP. What is all this acronym stuff eh?

AD is Anaerobic Digestion, its the sort of process that happens in a sewage works where all that nasty stuff is broken down by 'good' bacteria. What is left is largely safe but has given off lots of methane gas and CO2, along with some other trace stuff. Anaerobic means 'without Oxygen'.

So to create bio-methane by digestion of waste products has to be "Carbon (dioxide) Negative" as it is removing methane from being released into the atmosphere! See article below about atmospheric methane - CLICK HERE

Now that Methane is what we need. Its almost the same as Natural Gas that you buy at home. So it can be 'cleaned up' and sent down pipes to the gas mains or it can run a gas fired electricity generator.
But rather than just generate electricity, we also need to look at how effective the burning of gas in an engine really is. When gas is burned in say a modified car engine to drive a shaft to turn a generator to produce electricity, there are loses. These loses affect the efficiency of turning the energy value of gas into electricity. It is disappointing to discover that only around 20-25% of the gas burnt produces the electricity. The rest is 'low grade' waste heat.

However, this so called 'low grade' heat to you and me living in a house is more than enough to give us central heating and hot water. It's also enough to run through a device called an 'absorbtion chiller' so we get chilled water to run an air conditioning system.

By now you could be thinking about the CHP and CHCP bits. They mean

The good thing about using the 'waste' heat in this way is that we get a lot more use out of the energy (from the methane) gas. So 20-25% of the energy from the gas gives you the electrical power generation, but we can also get around 50-60% use from the Heating and Cooling. This jacks the efficiency of a CHCP system up to the 80-85% energy efficiency range. As you will agree its a lot better than 20-25%. So energy efficiency is a major benefit.

If a CHP unit was to replace simple power generation then we can practically quadruple the benefits or useful energy. This is the basis of what is called 'Distributed Energy', rather than just focusing on electrical generation as our Utilities have done for  a long time in the UK and US and the other nations they have 'sold' this daft idea to.

Now back to AD. As a 'consumer' (as we all are) we waste an awful lot of stuff in our everyday lives. As do the factories that produce 'processed foods' and our agricultural practices. Food we discard, grass cuttings, stuff we don't eat in a restaurant, unused oils and fats in cooking, effluents etc, in fact anything that will 'rot' down. Now imagine if the waste collection authority/company was to have an AD system to throw all this organic waste into.

Well they could then be in the power, heating and cooling business! Trouble is most of these organisations don't actually 'think outside of the box' like they all claim. If they did, rubbish collection would be really very profitable!

But that is the concept behind a coherent "waste to energy policy" that EVERY public authority or waste collection agency MUST adopt if their green credentials are to be believed. Otherwise its all just HOT AIR. (which is another story!!).